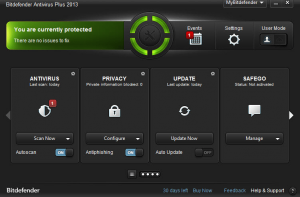 The first of many problems found with BitDefender Antivirus was in the programâ€™s near inability to install correctly. The program was found to be close to incapable of installing correctly without many attempts. Moreover, efforts to reach anyone at customer service for installation help or other kinds of assistance, either by phone or email, were next to impossible. While BitDefender claims to offer 24-hour tech support, results indicate otherwise. Additionally, many users have found the tech staff incapable of actually assisting.

When tested, BitDefender Antivirus was found to create a seemingly antiquated slowing effect on the computer. When scans were performed, they were lengthy and affected overall computer performance enough to hinder other programs in use. Known viruses were successfully able to penetrate the system, and with this, BitDefender struggled to remove the threats. The firewall proved to be insufficient and the programâ€™s updates were found to be inconsistent. While BitDefender claims to offer proactive protection against the latest viruses, spyware, phishing attacks, and identity theft internet scams, results suggested technologies required to provide this kind of protection were nearly nonexistent in BitDefender.

Perhaps the most inviting aspect of BitDefender Antivirus is the price. For the features it supposedly offers, the cost is very appealing. If BitDefender were truly capable of providing the services it supposedly is capable of, BitDefender would be the wise choice for all computer users. But recognizing the chasm between claims and results, it is wise to overlook this program. Antivirus programs with proven success and 100% malware removal guarantees to make looking past BitDefender an easy decision.