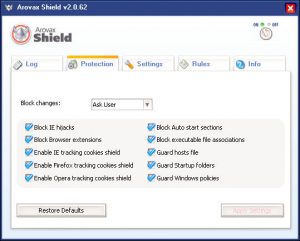 Arovax Shield is software designed to eliminate the dangerous files cluttering up your computer, including Trojan horses, worms, viruses, keystroke loggers, browser hijackers, tracking cookies, and system monitors. This program blocks malicious files which try to install themselves on the vulnerable areas of your PC, stopping threats before they start.

The system checks potential adware for removal, and sends any unknown files to the company lab for research. This allows the program to keep an up-to-date database of potential threats. It also works on a number of Windows platforms, including Windows Vista, and it doesn’t take up a lot of free disk space.

Arovax Shield gets positive reviews for its easy-to-use interface, which can make it simple for novice users to find their way around the system. Satisfied users also like having the ability to customize their search, and scan specific drives and folders on their hard drive. They also praise the fact that it takes very few computer resources to run.

Not everyone is a fan of the software, however. Several users complained that the earlier versions of the program worked fine, but the most recent upgrades are not effective. One user pointed out that his computer ran as well without the download as it did with it, which lead him to question its efficiency.

Another unsatisfied user claimed that when he initially went to download the system, one of his other programs flagged the software as a rootkit. He claims he ignored the warning and the download ended up crashing his computer. There are several other reviews complaining about how the program clashes with similar cleaning tools, and many provide lists of upgrades that would be necessary to make it a premium system.

ArovaxShield users do seem to like that it delivers on the company’s promises. Fans of the